Installing PyInstaller on a Poetry project on MacOS

I'm looking to create a cross-platform executable of my commandline application. The application is using poetry as the package manager, and I'm running this on MacOS.

First we need to install PyInstaller:

Then it should be as simple as running the following:

However, this resulted in the following error:

macholib can be used to analyze and edit Mach-O headers, the executable format used by Mac OS X.

It’s typically used as a dependency analysis tool, and also to rewrite dylib references in Mach-O headers to be @executable_path relative.

Manually adding this dependency to the project addresses this:

However, now calling pyinstaller again throws up a new error:

Unable to find "nltk_data" when adding binary and data files.

NLTK is a leading platform for building Python programs to work with human language data. It provides easy-to-use interfaces to over 50 corpora and lexical resources such as WordNet, along with a suite of text processing libraries for classification, tokenization, stemming, tagging, parsing, and semantic reasoning, wrappers for industrial-strength NLP libraries [...].

Fortunately we can download the missing data as follows (from within the poetry shell):

Press the download button on the window that pops up and make sure the installation path matches the error message path.

Then fix the path to NLTK in PyInstaller according to this StackOverflow answer. To get to the right location, ask poetry:

Rerunning the pyinstaller command after this produced an executable! However it's 1.2GB, propably due to including the macholib library.

I will update this post when I've figured this out.

If you follow this blog you will have noticed that I've commented multiple times on needless distractions that seem to have pervaded modern computing. Today, let's present a few solutions.

Firstly, when in the flow of doing deep work, watching animations delay your actions can be a source of frustration. While we can't speed up GitHub, we can speed up macOS. In the accessibility settings, check Display > Reduce Motion. This will speed up the interface and Mission Control animations. If you miss the garishness, you can turn it back off but chances are you will notice the system not getting in the way as much.

Secondly a tip for fellow Homebrew users. When you're ready to work through that difficult project tooling setup, it can be the worst time for Homebrew to decide to update it self, especially as this can take up to half a minute depending on how far behind your version is. Not now Homebrew! If you follow the instructions at Homebrew Autoupdate you can setup Homebrew to update itself in the background.

Finally, if you're using oh-my-zsh or bash equivalent, there will be a setting for it to update itself without prompting. Edit .zshrc and add DISABLE_UPDATE_PROMPT="true". I've not had any issues.

Cheers to a focused work experience! 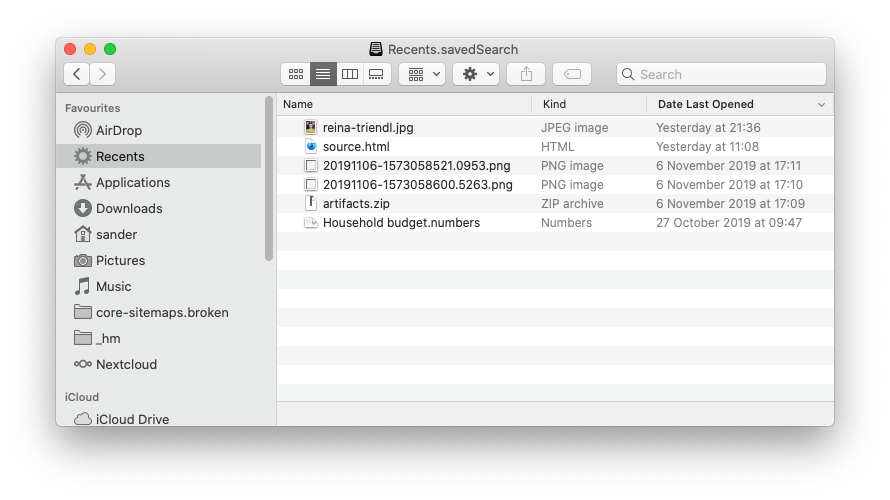 So if you open Recents in the sidebar it's likely it's full of files you have no idea you recently opened. It's most likely that you didn't. We can make Recents more useful by restricting the last opened date, and make using it more convenient. This is how:

As a bonus tip, update  the icon for the smart search (just like any other folder and app) as follows:

This changes the icon in the window title, but I haven't found out how to change it in the sidebar.

I had trouble installing global npm packages, which failed due to permission errors. I don't want to use sudo as this will lead to problems later, and I don't want to set the global installation directory to a local directory, as that means other users don't have access to the packages.

As recommended by the NodeJS documentation this is best fixed by installing node via a version manager.

First, remove node which I incorrectly installed with homebrew:

Then install nvm as per the official instructions. In my case this also failed as this is a new system that doesn't have a .bash_profile yet. Hower as I wanted to install the zsh shell, I installed oh-my-zsh as per the instructions on their site.

Once zsh was installed (or you've created a .bash_profile using touch ~/.bash_profile, you can install node in a correct manner as follows:

Fix for Google Chrome Bouncing Forever in the macOS Dock

I had the issue where it was not possible to launch Google Chrome. It would bounce in the dock forever without actually starting. Trashing the application and associated files (with Hazel) did not work.

Other people had the same problem:

The following instructions will help get Chrome back up and running.

The solution to this issue is to remove all application settings. Start a terminal:

If the fix did not work in your case, use the following commands to restore the original folder.

So I was seeing graphical glitches, freezes and Activity Monitor indicated memory pressure. Turns out macOS doesn't mount a swap file, as I am running from an external SSD install.

This is easily fixed. I can't believe it is a problem though.

By the way I had to change the end of line 4 (because the command in the Ask Different answer returned multiple results) to:

It's easy to add the launch item using Lingon X and start it with sudo ./mountvm.sh for the current session.

If you've just upgraded to Sierra and previously had Homebrew installed you may find that it no longer works because of the stricter security feature in macOS. In order to get Homebrew back up and running you need to execute the following commands in your terminal (thanks thehitmaniptf):

Once this is done you can successfully update Homebrew as normal, and diagnose any remaining issues:

After running this you will receive instructions on how to restore the permissions on /usr/local as after updating Homebrew no longer will use this path.

Update 6th Nov, 2016: When using cask you might get told to update the cask room location:

I've been using Traktor for years now as my deejaying solution and broadcasting tool. The one missing feature on the broadcasting side is that it can only stream directly to Icecast servers, lacking the ability to stream to SHOUTcast based servers. Most servers use the SHOUTcast streaming protocol which grew popular through the MP3 movement back around the turn of the century. We will setup a transcoding link to enable streaming to SHOUTcast servers.

This guide will focus on OS X but on a general level is also applicable to Windows users.

This replaces my previous guide at https://sites.google.com/site/traktorshoutcast/

We will need the do the following things:

Also useful is to keep the SHOUTcast stream (remote stream) details to connect to at hand (host, port, password).

Homebrew is a terminal package manager to add / remove / update OS X software and compile it from source code for us, so we don't have to.

Homebrew installs the stuff you need that Apple didn’t.

To install, follow the directions on http://brew.sh. Currently (as of Feb 16) that says:

After everything is setup you can run brew update to update your formulae, brew upgrade to upgrade to their latest versions, and brew doctor to diagnose any issues with your particular installation. Keep the terminal open for the next step.

Icecast is a streaming media server which [...] can be used to create an Internet radio station or a privately running jukebox and many things in between.

We will setup the local streaming server so that we can connect Traktor and the transcoder to it.

If I remember correctly, everything should go smoothly and before long you'll get a message saying it's successfully installed.

To keep the configuration files we are about to create nicely together, create a broadcast folder somewhere (I used ~/Music/Broadcast).

I have prepared a very simple configuration file for you, download it from https://gist.github.com/svandragt/f7ecb720416a68f096a1 (right click the raw button and select Download Linked File As.. and save it as icecast.xml in the broadcast folder you just created).

You won't have to change the contents of this file, apart from the passwords.
This configuration creates a mount point on http://localhost:8000/traktor.ogg for Traktor and LiquidSoap to connect to.

In the terminal window, in your broadcast folder, run icecast -c icecast.xml. It should show a few warnings but no errors, and your local streaming server is now running. Stop it now by pressing ctrl+c.

Our flagship is liquidsoap, a swiss-army knife for multimedia streaming, notably used for netradios and webtvs. Liquidsoap is a powerful and flexible language for describing your streams. It offers a rich collection of operators that you can combine at will, giving you more power than you need for creating or transforming streams. But liquidsoap is still very light and easy to use, in the Unix tradition of simple strong components working together.

We will install the program and setup a flow (configuration) to connect to the local streaming server, and broadcast it to the remote stream.

It should have been simple to install using brew, but unfortunately it was not. After several days of debugging here is a working set of instructions I produced.

In the terminal window you left open, we will run the following commands:

Grab a drink. After a while hopefully all works fine. I noticed that LiquidSoap is now recommending OPAM to install it so you could try that if this doesn't work for you. (http://liquidsoap.fm/download.html) - I have not tried it.

As before, I have created a very simple flow. You will need to setup one flow per destination stream so if you play at multiple radio stations / SecondLife clubs then you will need multiple flows.

This time you have to edit it, to add the remote stream details. Change the following lines to suit your purposes:

The configuration above is for broadcasting to a SHOUTcast server at http://example.com:8124 (using the password mypassword). Leave the rest of the file alone or make a copy and start experimenting LATER, see http://liquidsoap.fm/documentation.html. LiquidSoap is very powerful.

Starting and Stopping the Transcoder

In the terminal window, in your broadcast folder, run liquidsoap example.liq. It will start showing a lot of messages, and because you are not currently broadcasting also some errors. Stop it now by pressing ctrl+c.

Use the following information to point to the local streaming server:

You can enter whatever you like in the Metadata Settings.

In Traktor, click the broadcast button (the little attenna). It will flash because the local streaming server isn't running and therefore Traktor cannot connect to it. Whenever Icecast is running but the button is still flashing, check that the password and other connection details match.

Before you start streaming:

When you start streaming:

When you are finished

I hope this helps anyone having trouble deejaying online, I enjoy it very much and if you'd like to listen to deep house / electronica, please listen to my mixes.

Wouldn't it be useful if iTunes would (have at least the option to) sync app updates to your device automatically after downloading them? How often I have forgot to sync and find out later in the day that my apps are still out of date.